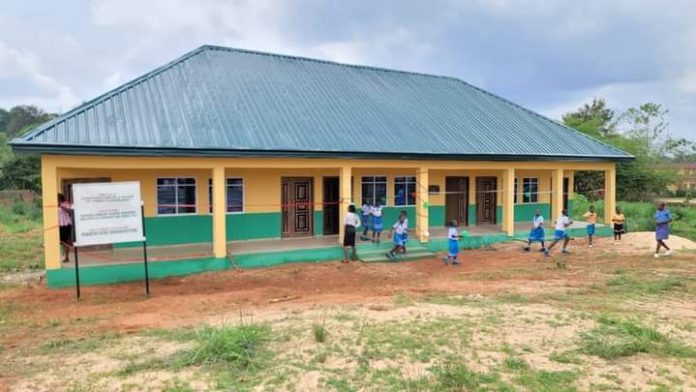 The Senator representing Anambra Central Senatorial District, Uche Ekwunife on the 20th of April 2021, commissioned a block of three classrooms at Central School Mbaukwu, Awka South LGA. The exercise was in line with Ekwunife’s commitment to improve the standards of education and give the sector adequate attention. According to the people of the community the project is the first project attracted and completed by a lawmaker in the community.

Speaking shortly before the commissioning, Ekwunife stated that education is an agent of transformation which should be accorded a special place for any state yearning for meaningful progress. She said that she would continue to offer the people the best of representation.

Speaking further, the Igbo-Ukwu born Senator thanked the community for their support and stated her resolve to attract more dividends of democracy to the state.

Welcoming the Senator, the Archbishop, Province of the Niger, Awka Diocese, Most Revd Alexander Ibezim ably represented by the school manager, Ven D. C Ezeobi, said that the school management were delighted by the gesture extended to the school. He commended the Senator for her sterling performance, praying God to bless and see her through in her guber project.

Speaking, a PDP stakeholder, Aaron Nwafor said that when the project commenced that he was not worried because he knew it would be completed. He said that the project is the dividend of the community’s support. He described Ekwunife as an exemplary lawmaker, saying that she is doing very well.

On his part, Chief Vincent Odum popularly known as African Chief assured that the community would continue to support the chairman Senate Committee on Science and Technology for her quality representation. He noted that the last elections was the first time he had publicly declared support for a candidate and he was very happy the community was reaping the dividends.