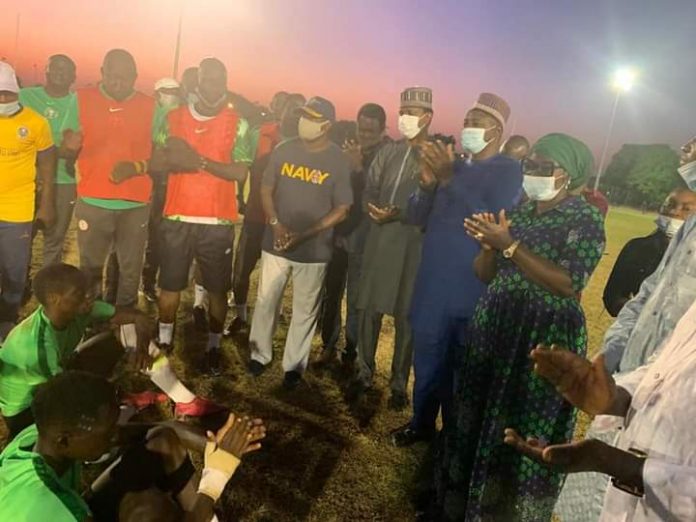 As member, Senate Committee on Sports and Youth Development, the Senator representing Anambra Central Senatorial District, Senator Uche Ekwunife (Iyom) had joined the Minister of Sports and Youth Development, Mr Sunday Dare and a delegation of the Senate committee in visiting the camp of the Golden Eaglets before they departed to Togo for the ongoing WAFU U17 tournament.

In a congratulatory message to the Golden Eaglets, Ekwunife extolled the team for making the nation proud, and advancing to the Semis of the West African Football Union tournament. She described Sports as a veritable platform for youth development and called for improvement in welfare and support for the nation’s football teams.

While enjoining the Golden Eaglets to remain upbeat as they take on Burkina Faso in what is expected to be a tough Semi Final encounter on Friday, the quintessential Federal Lawmaker extolled the Minister of Sports and Youth Development, Mr Sunday Dare for his determination to overhaul the nation’s sports sector. She urged him to use his position to further identify and promote talents that can be sponsored to participate in both local and international sports activities.

Ekwunife stressed on the need for the Federal and State governments to utilize sports as an avenue to identify and grow the natural talents of young sports inclined men and women who can be found in every State of the Federation. She advocated for more financial support from both the public and private sectors to ensure that the nation’s sporting talents are adequately rewarded for their services to the country’s sports teams.