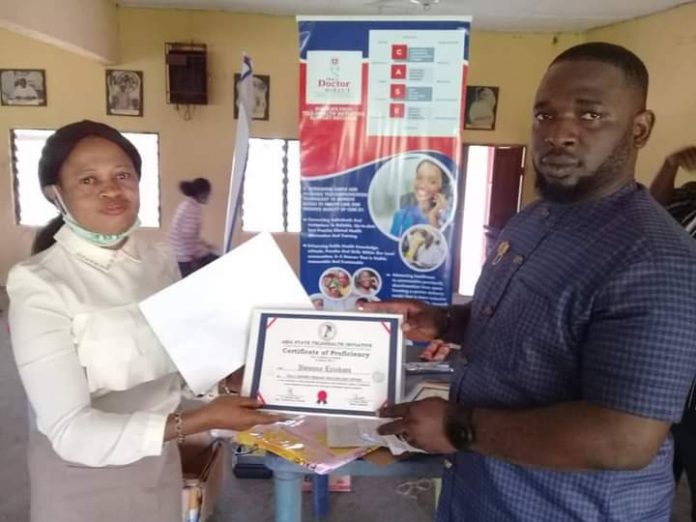 Abia State TeleHealth Initiative has concluded its Proficiency Certification Exercise for Officers-in Charge, (OiCs) of Primary Healthcare Centers, (PHCs), in the Seventeen (17) Local Government Areas of the State with a huge turn-out of participants and a resounding success.

In a release, Dr. Omas Ubiame said a total of 485 OiCs out of the 514 OiCs that took part in the exam passed with only 29 failing to make it through thereby given it a 94% success rate.

Ubiame explained that those who failed will be listed for a resit alongside a 2nd batch of OiCS schedule for June, 2021.

Certificates of Proficiency were issued to the OiCs in a brief award ceremony held immediately after the exercise while those who were unable to get their certificates at the exam venues will receive theirs at a local ceremony by the corresponding Health Authority Secretary (HAS).

She listed the gains of the exercise which she described as both deep-seating and far-reaching to include: “Improving the aptitude and skill of OiCs in Abia State towards Tele-Health; Enhancing the discuss of telehealth amongst local healthcare workers in Abia State; Advancing the debate of leveraging technology to drive healthcare services with an evidence-base as well as Data collected/collated will help drive the narrative for further institutionalization of the Abia State Telehealth Initiative.”

According to her, other projects in the line for further Institutionalization of Telehealth include: “Proposal for Telehealth to be introduced at Studentship level, as an elective course, ‘Introduction to TeleHealth 101’ for School of Health students at The School of Health, Aba, a clinical externship programme for TeleHealth Providers at the FMC, Umuahia and the proposed Abia State TeleHealth Bill/Law, being developed under the supervision of the House Committee on Health.”