Barr. Ifeanyi Mbanusi Mobilises Support for Labour Party, Ahead of 2023

Member of the Labour Party National Presidential Campaign Committee, Barr. Ifeanyi Mbanusi, has intensified efforts towards mobilizing support for the Labour Party, ahead of the 2023 General Election. 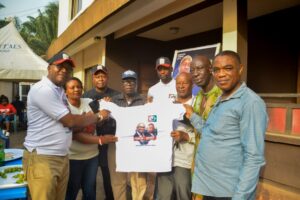 Barr. Mbanusi who has been a member of Labour Party, was the candidate of the party in the 2013 local government election in Anambra State, where he contested for Idemili North LGA Chairmanship. Ever since, he has remained supportive to the party as one of LP’s most valuable stakeholders in Idemili North and Idemili South LGAs.
Beyond politics, Barr. Mbanusi is well known in his community, Umuoji, for various humanitarian works geared towards community development. 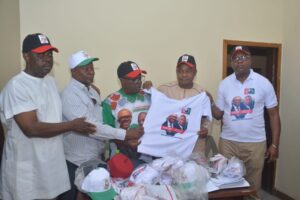 As part of his efforts in helping his party mobilise for the upcoming General Elections, Barr. Ifeanyi Mbanusi on Tuesday, hosted officials of Labour Party in Idemili North and Idemili South LGAs, in his home at Umuoji, Idemili North LGA. He also distributed branded t.shirts and face caps among others, to LP officials in the two LGAs. Those in attendance were the LGA Chairmen and Secretaries of LP, as well as the Chairmen and Secretaries of LP in all the political wards of the two LGAs. In attendance also was the Anambra State Chairman of the Labour Party, Sir. Ugochukwu Emeh, as well as some stakeholders in Idemili North and Idemili South LGAs.

In his remarks, Barr. Ifeanyi Mbanusi reminded attendees that he is one of them. “LP is my party. I have never belonged to another party aside LP”, he said. Speaking on why he conveyed the meeting, Mbanusi said that it is time for stakeholders like himself, to make their impact felt, as leaders. So that the party will have a victorious outing at the polls. “My reason for bringing us here today is to encourage us. Contestants and stakeholders are supposed to show commitment. This gathering is for me to show my unalloyed commitment to what we are doing. We are working towards the same goal”, Barr. Mbanusi said.

Commenting on the February 25th Presidential Election, Mbanusi said that the people must not be distracted. According to him, this Presidential Election is about the stake of all Nigerians in the Nigeria project. “Let no one deceive you. The argument is that Igbo nation deserves to have their fair share in Nigeria. People in different parts of Nigeria agrees to this”, he assured. 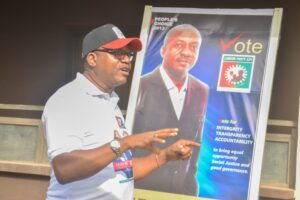 The LP, Anambra State Chairman also urged party officials to quickly comply with all assignments and directives as efforts are intensified in preparation for the General Elections.

Meanwhile, Chinedu Osefoh, a stakeholder in Idemili North LGA at the event, declared his interest to become a member of the Labour Party and was immediately admitted into the party.

Earlier, Barr. Ifeanyi Mbanusi had distributed hundreds of branded shirts and face caps to the Anambra State LP Presidential Campaign, during their meeting Chaired by Joe Martins Uzodike in Awka, the State capital.