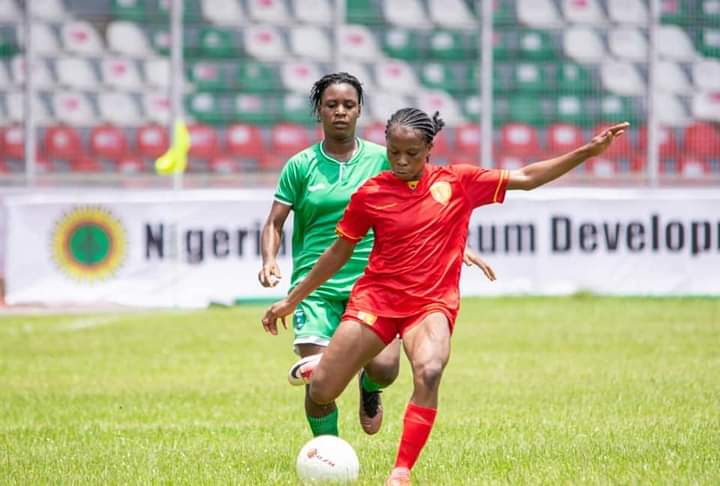 Edo Queens, on Wednesday, beat Nasarawa Amazons FC 5-4 in a penalty shootout to secure a spot in the final stage of the Betsy Obaseki Women Football Tournament (BOWFT).

The match played at the Samuel Ogbemudia Stadium in Benin City, proceeded to a penalty shootout after both teams failed to find the back of the net after 90 minutes of epic battle.

The second semifinal match between FC Robo Queens and Delta Queens was a piece of cake for the Lagos-based Robo FC side, who crushed their opponents 4-1 to sail through to the finals of the tournament.

The early goal by Gift Monday in the first five minutes of the match opened the scoreline for the swift and energetic Robo FC side, before the pressure from the Lagos-based team forced Fehintola Mabakonje to score an own goal in the eight minute to make it 2-0. Hope came again for the Delta Queens side when Chinansa Agoh pulled in her goal through a fine strike in the 26th minute to make the score line 2-1.

23 minutes into the second half, Robo FC’s Taiwo Lawal registered her name in the score sheet, while a goal by Rukayat Oladiti in the 81st minute sealed the victory for the Lagos-based Robo FC side.

The final match of the competition will be played on Friday, September 16, 2022, between Edo Queens and FC Robo at the Samuel Ogbemudia Stadium, Benin City.

Speaking on their victory, the captain of Edo Queens, Onyebuchi Goodness, said: “I am happy we won the match, though the Nasarawa Amazons were tough. I believe we will win the tournament because that has been our goal since we came third in the previous edition of the tournament held last year.”

The tournament, which is Nigeria’s only pre-season women football championship, is a brainchild of the Wife of the Edo State Governor, Mrs. Betsy Obaseki. The tournament themed, ‘Say No to Drugs’ aims at raising awareness on the adverse effects of drug abuse among youths.