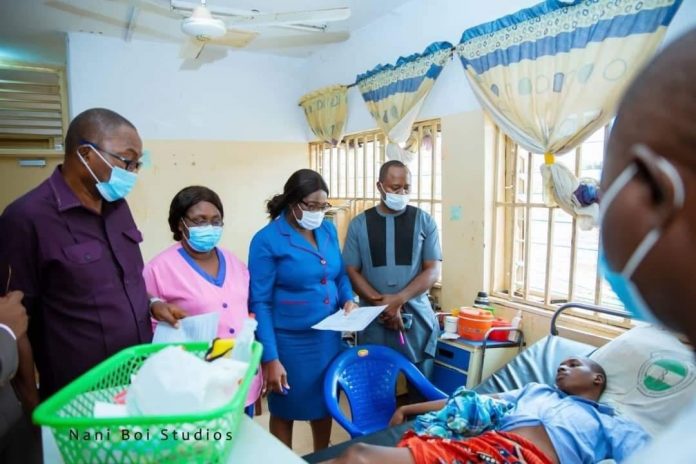 The Christian Association of Nigeria (CAN), Enugu State chapter has commended the Association of Nsukka Professors and friends of Governor Ifeanyi Ugwuanyi for keeping faith with the governor’s long-held tradition of celebrating his birthday, by paying huge hospital bills of discharged indigent patients in the state and other humanitarian gestures, on behalf of the governor.

The Nsukka Professors in collaboration with friends of Gov. Ugwuanyi, voluntarily paid hospital bills of discharged indigent patients in both federal and state-owned health institutions in Enugu State as well as faith-based organizations, totaling over N27.3 million, to commemorate the governor’s 57th birthday.

Reacting to the development, the State Chairman of CAN, Rev. Emmanuel Ositadinma Edeh, said that the humanitarian gesture displayed by the Nsukka Professors and friends of Gov. Ugwuanyi, was rare, commendable and a true reflection of the governor’s governance philosophy as a peaceful, humble, compassionate and devout Christian “who always identifies with the elderly, orphans, motherless babies, widows, less privileged and the sick ones in different hospitals, during his birthday celebration and other festive periods”.

Rev. Edeh stated that the Nsukka professors and friends of Gov. Ugwuanyi, who equally organized a symposium in honour of the governor, “simply demonstrated to the entire world that they have learnt so many good lessons from the life of His Excellency, Rt. Hon. Dr. Ifeanyi Ugwuanyi, both from his words and deeds”.

The CAN Chairman added that “the organizers also proved to all and sundry that they have immortalized the living legacies of the governor, by visiting different hospitals in Enugu State, where they paid millions of naira as bills, together with other kind gestures which the governor normally showed to the less privileged ones during his birthday”.

He therefore called on other privileged persons and groups to emulate the act of kindness demonstrated by the professors and friends of Gov. Ugwuanyi, by also giving generously to the poor and the needy.

“While many people are too selfish and will never have anything to do with the poor and the needy, the sick and the elderly, the widows and the orphans, there are some who are selfless and always giving hope to the hopeless, and touching the lives of the less privileged and helpless ones in the society.

“As a matter of fact, His Excellency, Rt. Hon. Dr. Ifeanyi Ugwuanyi, the Governor of Enugu State, is one of the people who have always identified with the elderly, orphans, motherless babies, widows, less privileged ones and the sick ones in different hospitals, during their birthday celebration and other festive periods.

“The Christian Association of Nigeria (CAN), Enugu State chapter, therefore, commended the Association of Nsukka Professors and friends of Rt. Hon. Ifeanyi Ugwuanyi for encouraging the governor to continue caring for the needy and the less privileged at all times, especially during his birthday celebration”, he said.

It would be recalled that Gov. Ugwuanyi, shortly after the symposium, celebrated his 57th birthday with the elderly at “Our Lady of Perpetual Help”, where he identified with the aged tenderly and made a donation to enable them celebrate his birthday with him.

At the symposium, the governor expressed gratitude that the Nsukka professors and his friends kept faith with his standing principle “by defraying very huge hospital bills for discharged indigent patients in many hospitals across the state, saying: “For this, I am indeed very grateful”.

The theme of symposium, chaired by former Minister of Power, Prof. Chinedu Nebo, was “At Peace with God and Neighbour: Understanding the Mantra of Governance in Enugu State”.

The first paper, entitled: “Understanding Governor Ugwuanyi’s ‘Enugu State is in the hands of God’ Against the Backdrop of the Biblical Moses and the Literary Ezeulu of Achebe’s Arrow of God” was presented by the Vice Chancellor of Godfrey Okoye University, Enugu, Rev. Fr. Prof. Christian Anieke.

The second paper, “From Ashua to Nrashi: An Interrogation of the Nexus between Environment, Struggle and Reward among the Igbo of Nigeria,” was presented by Prof. Damian Ugwutikiri Opata of the Department of English and Literary Studies, University of Nigeria, Nsukka.

While the third paper delivered by Rev. Fr. Emeka Chikezie Ngwoke, PhD, of Department of Religion and Cultural Studies, University of Nigeria Nsukka, was entitled, “Peace and Security in Enugu State: Building on the Bedrock of Conversation”.

Enugu State is in the hands of God! 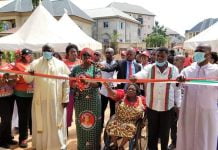 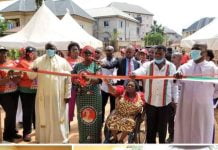 Everyone Is Entitled To A Befitting Home, So I See It As A Task To Bridge The Gap Between The Haves And Have Nots...