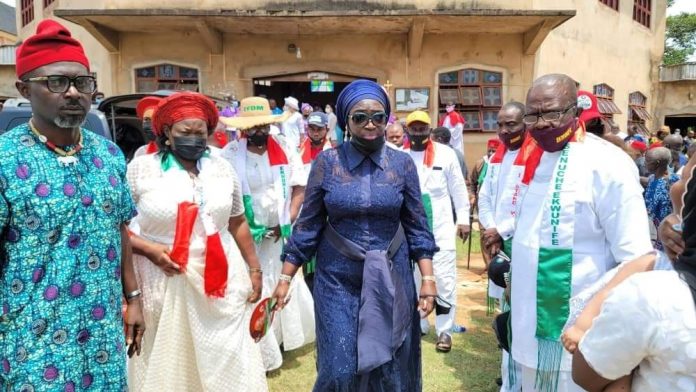 Late Chief Ezechukwu a native of Amuwo village and popularly known as Onukwube 1 of Amesi was until his transition to greater glory a prominent Nigerian journalist and policy analyst. The deceased was a well-respected columnist and media consultant known across the globe.

The Requiem Mass which was held at St. Vincent’s Catholic Church, Otikpo, Amesi was celebrated by the Catholic Bishop of Ekwulobia Diocese, Most Rev Peter Okpalaeke and had in attendance dignitaries from different strata of society.

Speaking shortly after the Mass, Ekwunife described the late Chief Ezechukwu as an ace journalist who entertained and educated his readership with the pen. Ekwunife recalled the several books authored by the deceased notably “The Man And The Myths”, adding that the late Chief Ezechukwu was a polyglot and nationalist who used his talent for the collective good of his people and Nigeria at large. Ekwunife further noted that the late Journalist of repute will be missed globally.

Speaking on behalf of the family, the younger brother of the deceased, Chief Oliver Ezechukwu thanked Ekwunife and other dignitaries who were present at the Mass to mourn with the family. He prayed for the repose of the soul of his elder brother.

Ekwunife however on behalf of her family, campaign organization and good people of Anambra Central Senatorial District extended condolences to the deceased family and the entire Amesi community.

Late Chief Ezechukwu died at the age of 67.