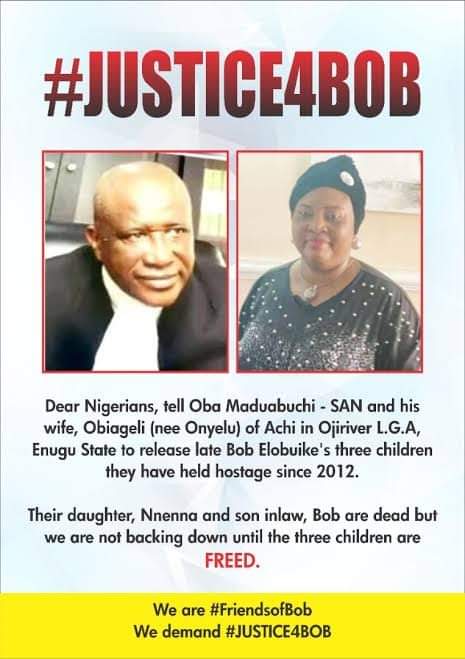 The last may not have been heard in a legal battle between a Senior Advocate of Nigeria (SAN), Mr. Ambrose Maduabuchi, from Achi, Oji River Council area of Enugu State and his In-law, an Octogenarian and retired senior Federal Civil Servant, Chief Joseph Chuka Elobuike, over the top legal officer’s refusal to bring home the remains of his late daughter-in-law, Mrs Nnenna Elobuike and three grandchildren.

The case which has been in court since 2020 took another dimension on 14th September, 2022, after the
plaintiff’s counsel (Barr. Ray Nnaji )
accused the defendant (Mr. Ambrose Maduabuchi) of intentionally disobeying the injunction of the court restraining the defendant from burying the corpse of Chief Elobuike’s deceased daughter-in-law and defendant’s daughter.

IGBERE TV reports that the plaintiff’s counsel filed for a restoratory injunction for the court to restore the case as it was before the burial of the corpse and, order for the exhumation of the corpse.

In December 2016, Mr. Robert (Bob) Elobuike, an ex-banker and son to Chief Joseph Chuka Elobuike died after battling with an undisclosed illness while his wife, Mrs. Nnenna Elobuike died of complications from brain tumor in March 2020, according to family source.

Contrary to Igbo tradition and customs, Maduabuchi, and family, according to Chief Elobuike, had denied them access to the remains of their late daughter in- law, Mrs. Nnenna Elobuike and their three children, even when she was duly and legally married to their late son, Robert Elobuike.

Chief Elobuike, in the suit, said the SAN popularly known as Oba, locked him and his family members out on relevant information concerning the upkeep and whereabouts of his deceased daughter in-law, Nnenna and his three grandchildren who are products of the marriage that existed between his now deceased son, Robert Elobuike and Nnenna Maduabuchi after their holy matrimony in December 2008.

A source close to the Elobuikes revealed that trouble started when in an ensuing marital crisis between late Nnenna and Robert, the former ran away from her matrimonial home with their three kids, leaving behind her husband who was overwhelmed by the domestic crisis.

As the matter lingered without any solution, Nnenna’s mother, Mrs. Obiageli Maduabuchi, one Sunday morning, precisely October 7, 2012, stormed Robert’s matrimonial home in Enugu, in company of two women said to be her husband’s (Oba) sister and niece, two men and Nnenna’s two brothers.

According to the source, the uninvited guests made away with Robert’s properties which they loaded in a waiting truck, parked outside the premises of his apartment.

The source said since Mrs. Maduabuchi and her gang left that fateful Sunday, October 7, 2012 with her daughter and Robert’s property, the son in-law never set his eyes on neither his wife nor children, even as he was not allowed access to them until his unfortunate demise on December 6, 2016, following a brief illness.

It was learnt that throughout the period Robert who worked as a banker, was hospitalized at the University of Nigeria Teaching Hospital, UNTH, Itiku-Ozalla, Enugu, neither his estranged wife Nnenna, his Children nor any member of his in-laws’ family visited him at the hospital, despite several calls and messages, informing her about her husband’s failing health condition.

Nnenna also refused to make herself available to receive the death certificate of her husband when she was informed about his sudden demise.

Robert, fondly called Bob by friends and close associates, was eventually committed to mother Earth on December 15, 2016 without the presence of his wife, children nor any representative from his In-laws’ family as they all refused to grace or participate in the funeral ceremony.

It was learnt that Mr. Maduabuchi who has not been communicating with his in-laws, had on Wednesday, March 25, 2020, called Chief Elobuike on the phone to inform him that his daughter-in-law, Nnenna, had also died.

He told his in-law (Elobuike) that their daughter in law had tumour in the head and promised to visit his in-law to discuss in details, the death, “a promise he never fulfilled till date,” said the source.

“SAN never fulfilled any of such promise, and when contacted, he blamed the COVID-19 lockdown as reasons for his inability to visit Chief Elobuike as promised.

Despite all he did, Mr. Maduabuchi, left Chief Elobuike in the lurch and began making her daughter’s burial arrangement with one Osita Okechukwu and Calistus Mgboh.

The source said “when Chief Elobuike learnt of this, he was angered and cautioned Maduabuchi against any discussion or arrangement for burial at his place with anyone other than himself being the father to the son marrying the deceased (Nnenna).

Elobuike, thereafter, insisted that for the burial to take place at his native home, as demanded by custom, his in-law, Maduabuchi, must produce the corpse of the deceased and the three children must come home and receive their mother’s remains rather than attend her funeral like visitors.

Angered by the manner the SAN treated him and his family, Chief Elobuike filed a lawsuit against Maduabuchi, with several arguments alluding to the fact that his in-law had refused to comply with the dictates of custom and voice of reason.

Chief Elobuike argued that as tradition demands, Nnenna, the deceased daughter-in-law who hails from Ehuhe-Achi in Oji River Council area of Enugu state, must be buried at her place of marriage, which is late Robert Elobuike’s compound in Eke, Udi Local Government Council.

However, there is strong indication that Maduabuchi may have buried Nnenna in his country home at Oji River instead of her husband’s hometown, Eke in Udi LGA.

Meanwhile, as the case continues in court, the plaintiff’s counsel got an injunction from the court restraining the defendant from burying the corpse of the defendant’s deceased daughter.

According to report, the defendant went ahead with the burial of his deceased daughter.

Consequently, the plaintiff’s counsel filed for a restoratory injuction for the court to restore the case as it was before the burial of the corpse and, order for the exhumation of the corpse.

On Wednesday September 14 2022, as both counsel argued in court on which application should get prior hearing. The court subsequently fixed Friday October 21, 2022, to determine the application to be heard first.