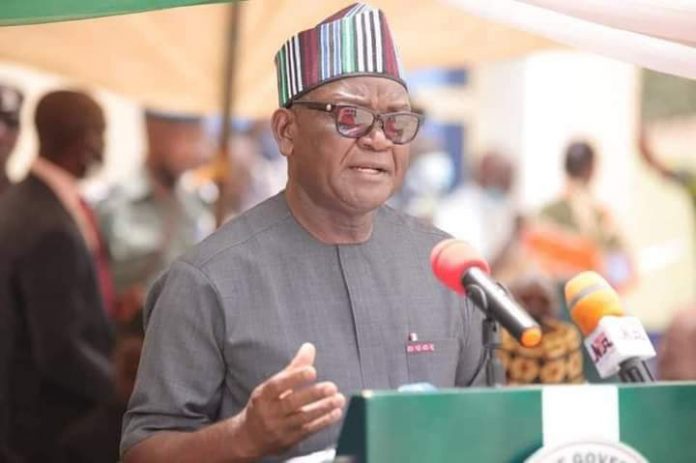 Benue State Governor, Samuel Ortom says guaranteeing good health for people of the State remains one of the top priorities of his administration.

Governor Ortom reiterated this today at the commissioning of a permanent office complex of the State Primary Health Care Board, SPHCB, Makurdi.

He noted that health is wealth, hence the resolve to make it one of the five pillars of the present administration which informed the establishment of SPHCB in 2015 at the inception of his reign.

According to the Governor, since establishment, he had continued to monitor and support SPHCB to ensure that health service delivery to the grassroots is optimised.

READ ALSO:  PDP Tells Tinubu, El-Rufai, Amaechi, Others To Speak Out On Restructuring

He stated that the SPHCB and the Benue State Health Insurance Agency are working in synergy to ensure Universal Health Coverage, UHC in the State.

Governor Ortom said disbursement of funds to eligible primary health care facilities in the state and enrollment of most vulnerable for easy access to service delivery would soon commence across the State.

The Governor who promised to look into demands by the SPHCB, urged the Bureau for Local Government and Chieftaincy Affairs as well as relevant agencies to ensure close synergy with SPHCB for optimal performance.

Commissioner for Health and Human Services, Dr Joseph Ngbea in an address said the SPHCB was established to provide effective and affordable health care services to people of the State.

Chairman SPHCB, Mrs Comfort Agogo and the Executive Secretary of the Board, Dr Bem Ageda while expressing delight over the edifice, appealed for provision of Cold Vans, working cold room, utility vehicles and conference Hall for the board as well as recruitment of more health workers among others.