…Assure governor of 100 percent support for PDP at the polls

The people said that Governor Ugwuanyi’s intervention in the Eha Amufu crisis was responsible for the peace the community is enjoying presently, disclosing that after the emergency peace and security meeting the governor had with stakeholders of Eha Amufu, there has not been any further attack in the area.

They reassured Governor Ugwuanyi of their overwhelming support and votes for all the candidates of the Peoples Democratic Party (PDP) in the state including the party’s governorship candidate, Dr. Peter Ndubuisi Mbah. 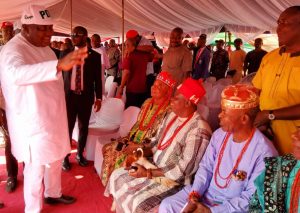 Isi-Uzo people made the remarks yesterday when Governor Ugwuanyi visited Ikem, the council headquarters to identify with them and ascertain how they were faring.

Welcoming Governor Ugwuanyi, the Council Chairman, Hon. Barr. Obiora Obeagu stated that the five old communities and 21 autonomous communities in Isi-Uzo LGA were grateful that “today our governor has brought peace to us,” revealing that “today Eha Amufu is back to its feet.”

Hon. Obeagu thanked God for the feat, adding that the governor did not only ensure that the crisis reduced, but that he also brought palliatives in the form of cash and food items to assist those who were displaced.

Declaring that “PDP is Isi-Uzo and Isi-Uzo is PDP”, the chairman assured Governor Ugwuanyi that the party will record a landslide victory in the council area in the forthcoming general election.

Also speaking, a community leader from Eha Amufu and former chairman of Isi-Uzo LGA, Hon. Eric Ebe, pointed out that when Eha-Amufu had security challenge last year, Governor Ugwuanyi made tireless and frantic efforts to address the issue, stating that he visited the community at night, had sleepless nights and did everything humanly possible to ensure that peace was restored to the area.

Hon. Ebe reassured the governor that Isi-Uzo LGA will deliver the PDP in the forthcoming elections in Enugu State, stating that the council has always delivered the PDP 100 percent in all the elections contested in the state since 1998 the party was formed.

Speaking in the same vein, a former chairman of Isi-Uzo LGA and former acting National Financial Secretary of the PDP, Hon. Osita Ogene, reiterated the untiring efforts Governor Ugwuanyi made in restoring peace to Eha-Amufu in particular and Isi-Uzo LGA in general, stressing that “from the day we had the security meeting with the governor till today, Eha-Amufu has been coming back fully, unbelievably.”

He asked Governor Ugwuanyi to “keep doing good as God will continue to remember you.”

The Bishop of Aha Amufu Diocese (Anglican Communion), Most. Rev. Daniel Olinya equally thanked God for the good works He has been using Governor Ugwuanyi to do in Eha-Amufu and Isi-Uzo LGA, especially in the areas of peace, security and development.

Other speakers, namely the State Chairman of the PDP, Hon. Augustine Nnamani, the lawmaker representing Enugu East/Isi-Uzo Federal Constituency, Hon. Prince Cornelius Nnaji, the member representing Isi-Uzo Constituency, Hon. Mrs. Catherine Amaka Ugwueze, the Commissioner for Commerce and Industry, Hon. Jideofor Ebeh, and Igwe Ogbodo, all thanked Governor Ugwuanyi for his positive intervention in the Eha Amufu crisis and reassured him of the overwhelming support of the people of Isi-Uzo LGA for the PDP as well as their commitment to ensure that all the party’s candidates win at the polls, maintaining that “Isi-Uzo is PDP and PDP is Isi-Uzo.”

Warmly received on arrival by a jubilant crowd and leaders of Isi-Uzo LGA, including Bishop Olinya, other clergymen and the traditional rulers led by HRH Igwe Sam Ogbodo, Governor Ugwuanyi appreciated the people of the council for the support they have been giving his administration since 2015 and the PDP since 1999.

The governor explained that he came to know how the people were faring considering what they passed through last year.

Governor Ugwuanyi prayed for the repose of departed souls and further prayed that God will never allow such to happen again.

Thanking the people of Isi-Uzo for accepting to deliver the PDP at the polls in Enugu State, the governor stated that by the virtue of his position as the leader of the PDP in the state, he is canvassing votes for all candidates of the party in the state.

He, therefore, urged the people to vote for the PDP and ensure that those who have not collected their Permanent Voters Cards (PVCs) do so for the full realisation of their support for the party at the polls.