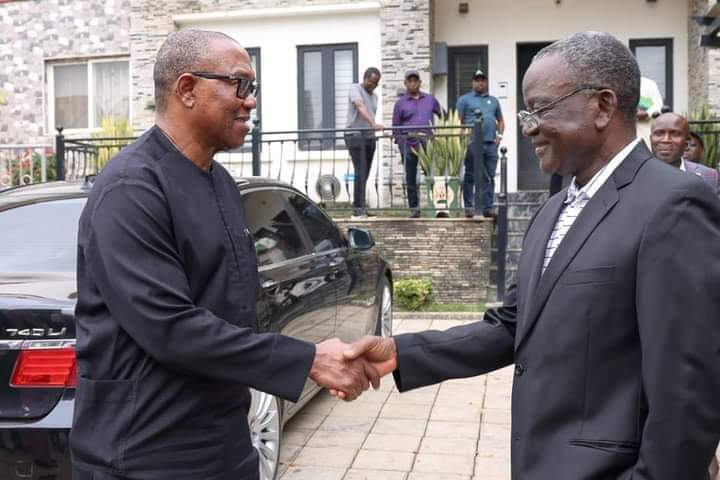 Governor Samuel Ortom of Benue state and the presidential candidate of the Labour Party, LP, Mr. Peter Obi Wednesday met behind closed doors in the Governor’s private residence in Abuja.

The meeting came less than 24 hours after the Governor returned from his two weeks working leave and trip to the United Kingdom and United States of America.

According to a statement by the Chief Press Secretary to the Governor, Nathaniel Ikyur, made available to newsmen in Makurdi, at the end of the meeting the two leaders jointly addressed the media.

He said Nigerians were in dire need of people with “commitment and competence” that would fix the leadership crisis that had plunged the country into outright chaos.

The Governor noted that the Labour Party’s presidential candidate was one among the qualified Nigerians that the people looked forward to help take the country out of the woods.

“Governor Ortom commended the decision of the former Anambra State Governor to engage Nigerians, especially major players in the country’s politics, irrespective of political leaning on his desire to serve as the country’s next President.

“He said even though he was a major stakeholder of the People’s Democratic Party, PDP, the LP candidate considered him as a Nigerian to consult on his aspiration.”

Earlier, the LP presidential candidate, had explained that the visit was to show respect to his former political ally in the PDP, pointing out that though they were now in different political parties, their friendship as citizens of the country was most important.

In his response to the question that he did not have the needed structures to win elections, Mr. Obi stated that the millions of Nigerians who had been impoverished by bad leadership over an extended period “are my structures to win.”

He pointed out that it was time for all hands to be on deck to correct the wrongs for a better Nigeria.

Related Topics:OrtomPeter Obi
Up Next