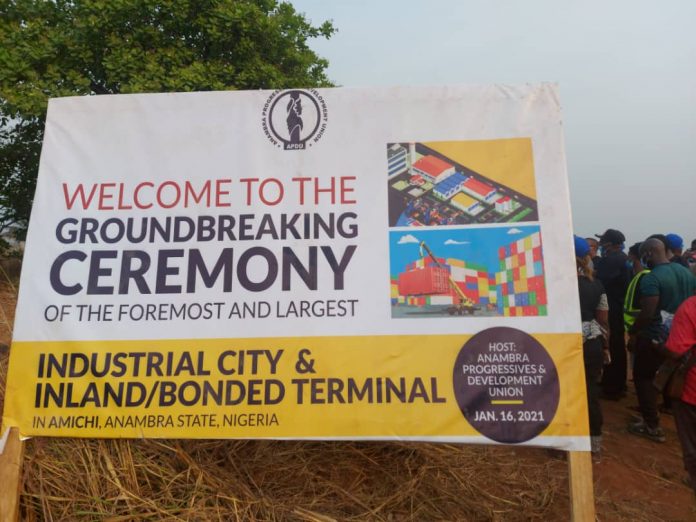 …Ubah And The Anambra Progressives Union Move To Take 25, 000 Youths Off The Labour Market As Industrial City Finally Berths In Amichi.

Residents of Eziama Amichi, a community in Nnewi South Local Government Area of Anambra State and its environs, on Saturday, 16th of January, 2021, could not hold their joy as, to the Glory of Almighty God, the Anambra Progressives and Development Union kicked off the construction of the proposed Industrial City and Inland/Bonded terminal in the area.

The Union which is convened by the Senator representing Anambra South, Dr. Patrick Ifeanyi Ubah, gathered in the community for the ground breaking and foundation laying ceremony of the project as they move to trigger the economic revival of the state through industrialisation and assimilation of our teeming jobless youth populace into becoming gainfully employed .

The Union used the opportunity to reassure the community and Anambrarians in general that they would never relent in their commitment to better their welfare and develop various sectors of the economy.

Speaking at the epic event, the group’s convener, Dr. Patrick Ifeanyi Ubah, thanked the Progressives for their uncommon drive which would not only go a long way in attracting various developmental projects to the community but also attract over twenty five thousand employments to the communities in Anambra State, in particular and, by extension, that of South East Region .

The Senator further informed the community that the project, which is the first of its kind in the South East geopolitical zone, will promote their wellbeing and empower many of their indigenes especially the youths. He also revealed that the industrial city would have standard residential quarters/dormitories for the staff and workers in order to maintain good standard of living and increase the expected output of the workforce.

The YPP leader and Chief Convener of the Progressives further stated that the inland terminal would minimize the challenges faced by many businesses and consequently, will reduce cost, increase turnover and promote the economy revival of the fortunes of the state . He also urged the community to protect the projects.

” I wish to also give special thanks to the Progressive members who are great sons of Amichi notable amongst whom are Chief Akai Egwuonwu ( CEO Anambra Rice Mills Ltd and C.E.O Of Chisco Transport , Chief Chidi Anyaegbu MFR for their efforts in bringing this novel and life changing project to Amichi ” The Senator Concludes

In his remarks, the traditional ruler of the community His Royal Highness Barrister Dr. Ofobuike Alphonsus Ezeoke thanked Senator Ubah and the Progressives for choosing the community as the site of the epic projects. He further said that with the projects, Amichi would be opened to various investors and this would go a long way in maximizing employment opportunities and improving the welfare of the people. The Igwe, who couldn’t hide his joy, also reassured the Progressives that the community would forever remain grateful to them and also promised to protect the projects.

READ ALSO:  NASU, SSANU To Embark On 3-Day Protest Over IPPIS, Others

Also speaking during the event, the President-General of Eziama, Chief Cletus Igbokwe, thanked Senator Ubah and the Progressives for making the giant move. Chief Igbokwe also maintained that the projects would go a long way in easing the challenges of the community especially its youths as massive employments would be provided and various investors would be attracted to the area. He also reassured the progressives that the community would ever remain grateful and urged them to keep up the good works.

The Anambra Progressives and Development Union is a group of prominent citizens convened by Senator Dr. Patrick Ifeanyi Ubah to contribute towards the development of various sectors of the Anambra economy. The group which has over three hundred and ninety billionaires as members has, so far, within a period of ten months, constructed two ultramodern medical and isolation centers at Nnamdi Azikiwe University Teaching Hospital (Permanent Site) Nnewi-Oraifite and Nnamdi Azikiwe University, Awka. Both facilities have been commissioned and handed over to the managements of both institutions respectively.

May God continue blessing the synergy among the Ifeanyi Ubah convened Progressives!