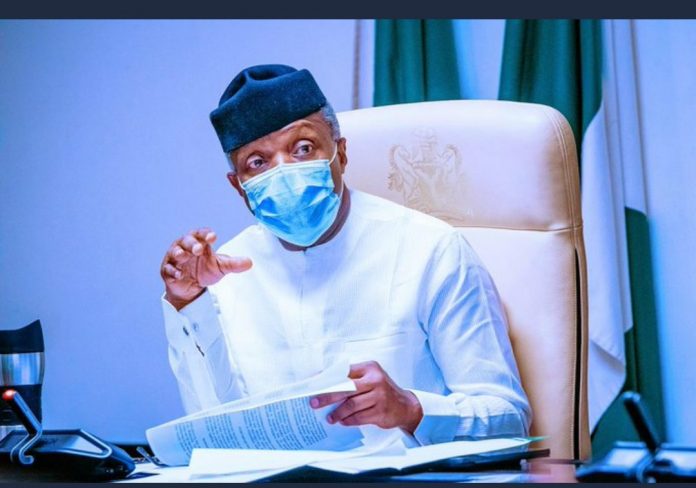 Adopting new models of investments for infrastructural development in the country is now an imperative as reliance on public expenditure alone is no longer sufficient or capable of meeting the $3 Trillion needed to bridge the infrastructural deficit over the next 30 years.

Vice President Yemi Osinbajo, SAN, stated this Thursday in his remarks at a webinar organized by Bureau for Public Enterprises (BPE) on deepening the Nigerian infrastructure stock through Public-Private Partnership (PPP).

According to the Vice President, “inspite of Government interventions over the years, Nigeria still faces a huge infrastructural deficit, which is constraining rapid economic growth. The Federal Government recognizes this fact which is why we are considering other approaches to complement and boost financing for the development and maintenance of infrastructure in Nigeria.

It is clear that this deficit can only be made up by private investment. Private sector is 92% of GDP while the Public Sector is mere 8%. So, the synergy between the public and private sector through Public-Private Partnerships (PPP) is really the realistic solution.”

Referencing statistics available in the Nigerian Integrated Infrastructure Masterplan (NIIMP) and the Economic Recovery & Growth Plan, Prof. Osinbajo noted that “Nigeria needs up to $3 trillion over the next 30 years to bridge the infrastructure gap.”

The Vice President explained that “the Federal Government would have to spend the entire revised 2020 appropriation of N10.81 trillion continuously for the next 108 years or more on capital expenditure (CAPEX) to meet that target. The fact that only N2.49 trillion was appropriated for capital expenditure in 2020, reflects the importance of deliberate and pragmatic action to boost infrastructural spending.”

It seems to me to be quite clear that the financial outlay and management capability required for infrastructural development and service delivery outstrip the financial and technical resources available to government.

“In other words, the traditional method of building infrastructure through budgetary allocations is inadequate and set to become harder because of increasingly limited fiscal space,” he added.

Speaking about the benefits of effectively implementing PPP arrangement for Nigeria, the Vice President explained that “if properly designed and executed, PPP models will unlock innovative infrastructure financing and management in a transparent and more efficient manner. Indeed, using PPP frameworks, Nigeria has the potential to attract and benefit immensely from huge local and foreign private sector resources.”

On how the Buhari administration is leveraging the partnership with the private sector to bridge the huge infrastructure gap, Prof. Osinbajo said “the Federal Government has recently issued a circular on the administration of PPP projects in the country to provide the much-needed clarity. The circular re-emphasizes that the BPE shall be responsible for the concession of public enterprises and infrastructure already listed in the First and Second Schedules of the Public Enterprises Act.”

The Vice President stated that “the circular equally stipulates that the BPE shall act on behalf of the FGN as the counterparty on all infrastructure projects being developed on a PPP basis whilst the Infrastructure Concession Regulatory Commission (ICRC) continues to act as the regulatory agency for PPP transactions with powers to inspect, supervise and monitor the projects and processes in order to ensure compliance with relevant laws, policies and regulations.”

Soliciting the cooperation of all stakeholders for the effective implementation of the policy, Prof. Osinbajo noted that “it is expected that this new policy direction would provide clarity to stakeholders and foster the improvement of PPP programmes in the country. Ministries, Departments and Agencies as well as the multilateral agencies and our development partners, are urged to support the PPP policy objectives and institutional arrangements already put up by Government.”

He stated further that, “as part of the new environment being created for the implementation of PPP projects, the Federal Government through the CBN, Nigerian Sovereign Investment Authority and African Finance Corporation and other financial institutions will be creating a N15 trillion Infrastructure Fund that will help to, not only unlock investment from local sources but also attract foreign private investment in infrastructure development.”

On the operations of the Infraco Company, Prof. Osinbajo said “the company will be professionally run by select managers who are chosen by internationally accepted standards. We will bring in the best qualified individuals to manage the Infraco because most investors will want to see a transparently run Infraco, and we intend to provide exactly that. This is to ensure that the investors’ resources are applied only to the best possible projects after the management of the company has looked at them and chosen them carefully.”