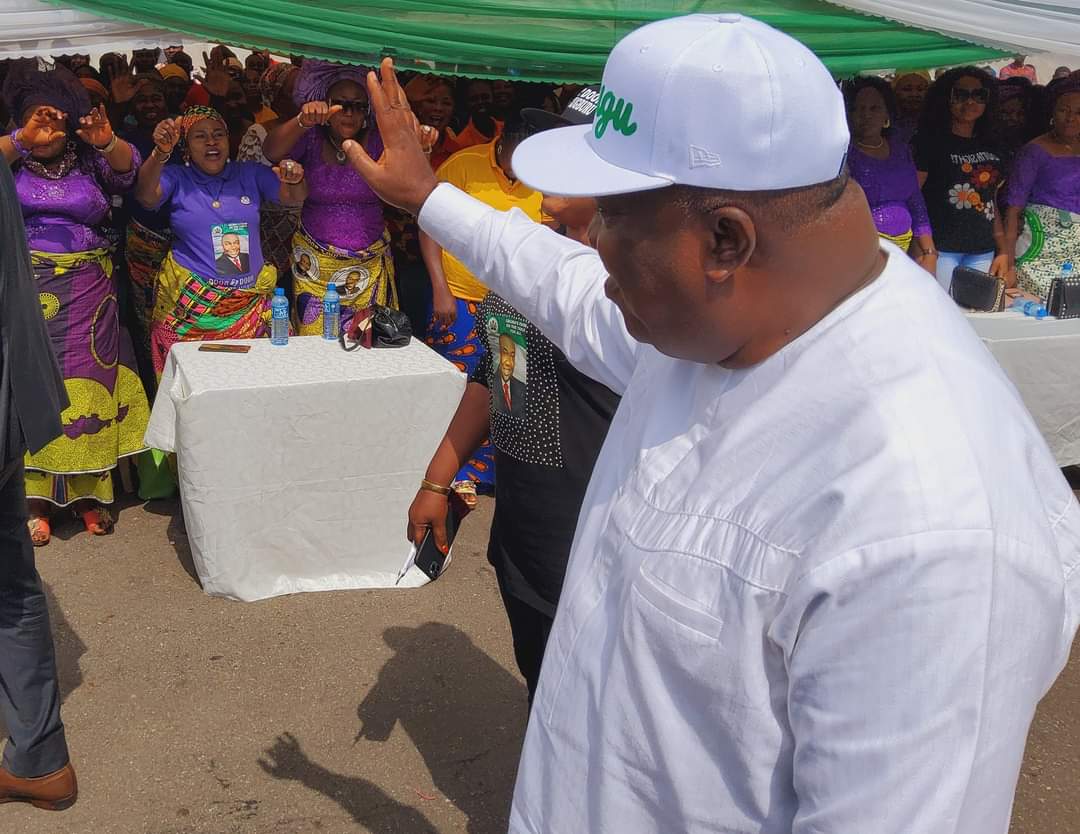 Our bond with you is irrevocable, Door-to-Door group tells Gov. Ugwuanyi

One of the major support groups of Governor Ifeanyi Ugwuanyi of Enugu State, Door-to-Door for Gburugburu, has reiterated its unflinching support for Gov. Ugwuanyi and his political decisions ahead of the 2023 general elections.

The group, comprising women, men and youths across the 17 local government areas of Enugu State, expressed their confidence in Gov. Ugwuanyi and his uncommon leadership style anchored on peace and good governance.

They reassured the governor that they are solidly behind him, stressing that where he stands is where they stand in respect of the 2023 general elections.

Speaking when members of Door-to-Door for Gburugburu paid a solidarity visit to Gov. Ugwuanyi at the Government House, Enugu, the Coordinator, Chief Mrs. Amaka Anajemba, told the governor that “we believe in you as our mentor”.

Mrs. Anajemba pointed out that the visit was to celebrate the governor’s success story in spite of numerous challenges confronting the country, adding that “we are here to remind you that it is the same Door-to-Door for Gburugburu since 2014 that is still in existence today”.

The group’s Coordinator asked Gov. Ugwuanyi to always count on their unalloyed support and solidarity, disclosing that the governor’s exemplary leadership style spurred most of them to join politics.

They expressed their commitment to support and work assiduously towards the victory of the governorship candidate of the Peoples Democratic Party (PDP) in Enugu State and the governor’s choice, Barr. Peter Ndubuisi Mbah, and other candidates of the party in the forthcoming general elections.

“Your Excellency, we came here to tell you that we are solidly behind you since 2014 till date; that the bond that bonded us together with you is irrevocable; that our speech is bonded.

Also speaking, the group’s Coordinator, Men’s wing, Ifeanyi Agbalibeazu, also told Gov. Ugwuanyi that “we have come here to give you wonderful accolade for what you have done in Enugu State”, adding: “We shall continue to appreciate you and anywhere you tell us to go in 2023 consider it done, Your Excellency”.

In his speech, the Coordinator for youths, Chukwunonso Ani, specifically commended Gov. Ugwuanyi for the peace he entrenched in Enugu State, stating that the feat, which is not easy to maintain, is uncommon in the entire country.

“Your Excellency, we thank you; we are loyal; we see your good works in Enugu State. Today, everybody sleep with his or her two eyes closed. It is not easy to maintain peace.

“If somebody tells you what it takes to maintain peace, you will know that it is not a small task. We are glad that Enugu is the most peaceful state in the South East. What we tell you is that the youths of Door-to-Door for Gburugburu are solidly behind you. There is no shaking”, he added.

On her part, the group’s Liaison Officer/ Coordinator, Non-Governmental Organizations (NGOs), Mrs. Elizabeth Ugwuoke, said that the numerous NGOs in Door-to-Door for Gburugburu have enormous goodwill and support for Gov. Ugwuanyi and his good works in Enugu State in spite of all the challenges confronting the country bordering on economy, security and public health, among others.

Mrs. Ugwuoke described Gov. Ugwuanyi as the most gender-friendly governor who has accommodated more women in governance of the state in so many ways, reiterating their resolve to continue to promote and support his administration to succeed.

Responding, Gov. Ugwuanyi thanked members of the group for their unceasing prayers, solidarity and support since 2014 till date.

The governor who attributed the peace and good governance in Enugu State to God, stressed that the favour of God made it possible for the electoral victories in 2015 and 2019 where he was reelected with 95.54 percent of the valid votes cast, a referendum on his first term achievements in office.

Gov. Ugwuanyi reassured them of his administration’s commitment to the wellbeing of the people of Enugu State including members of the support group.

He equally thanked other support groups for their solidarity, goodwill and prayers.

The Commissioner for Special Duties, Hon. Mrs. Mabel Agbo, and the Executive Secretary of Enugu State Christian Pilgrims Welfare Board, Barr. Nestor Ezeme, were among the dignitaries at the event.

Photos from the event