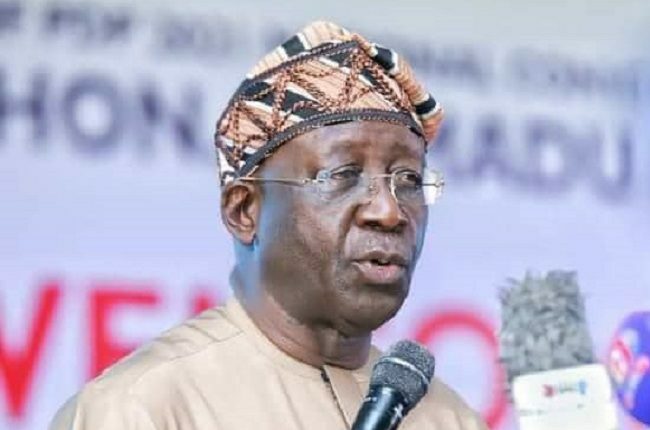 PDP: Despite Vote Of Confidence, Ayu Faces Critical Week In Battle For Survival

DESPITE having a vote of confidence passed in his favour during the last meeting of the National Executive Committee (NEC) of the Peoples Democratic Party (PDP), the national chairman, Dr. Iyorchia Ayu, faces critical times ahead as his adversaries have ostensibly concluded plans to ramp up pressure on him to step aside.

Credible party sources revealed to the Nigerian Tribune, on Sunday, that beyond the remarks by Governor Nyesom Wike and other prominent opponents of Ayu in PDP, part of the strategy that will unfold this week is the use of political pressure groups and surrogates to engage the media to press for the resignation of the party boss.

The Rivers governor has already dismissed the vote of confidence passed in Ayu as a charade that is of no effect given the fact that such action had not helped former PDP chairmen who had found themselves in similar situations in the past.

“This week you are going to see an upsurge in activities to get Ayu out of office. There will be more groups and individuals coming out to demand the removal of Ayu. He has to go because that is the only way left to salvage the party unity.

“Wike has been able to build a coalition to demand for the post of national chairman. So, it is no longer what anyone can wish away. Ayu has to go,” a top source within the Wike group argued.

The source added: “If Ayu thinks he will survive because of the vote of confidence, he has not learnt from history. Apart from Solomon Lar, nobody else had a vote of confidence passed in him and remained in office as PDP national chairman until the end of his tenure.”

Findings revealed that even though Wike has remained resolute on his membership of the PDP, he is said to be willing to do all that is necessary to stop the presidential candidate, Atiku Abubakar, from winning the election unless he first facilitates the correction of the seeming imbalance in the organogram of the main opposition party by allowing the ouster of Ayu and his replacement by a southerner.

However, Atiku’s camp was still adamant on Sunday that the party must be guided by its constitution rather than the desires of the first runner-up in the presidential primary.

Citing the role of Governor Wike in the removal and replacement of former PDP national chairmen, a senior insider in the Atiku campaign told the Nigerian Tribune that the Rivers governor ought not to have any problem with the decision of NEC to pass a vote of confidence in Ayu. The source admonished that the Rivers State governor must resist the temptation of pushing for the removal and appointment of all party chairman at the slightest excuse.

The source maintained: “Wike cannot be in the business of making and unmaking national chairmen of the party. The same Wike was the one who brought (Modu) Sherrif and removed him. He brought (Uche) Secondus and removed him. He brought (Ahmed) Makarfi and saw him out. So, the question you ask yourself is, has it become a fashion now for him to be enthroning and dethroning chairmen.” The Atiku group is, however, confident that the issue between the Rivers governor and the national chairman of the party will be resolved and Wike will remain in the PDP.

It said: “This issue will be resolved. Wike is not going anywhere and the people that are with him. Look at it. Wike is not going anywhere and all of them that are doing this thing are not going anywhere. It is going to be resolved. You will see what will happen. “Leave all that matter. Wike has about 40 candidates who are running for election. Where are they going to go to? Who is he going to partner with? Don’t forget that the presidential election comes before every other election. “If it has got to that point, it’s ok, fine; we want to deny Atiku; we want the PDP to be defeated. What is the guarantee that those people will support his presidential candidate, his senatorial candidates, House of Representatives, state House of Assembly, and all of that?

“So, that is it. That is where our confidence comes from. If you want to know, go back to (Olusegun) Obasanjo in 2003. Look at what he did to the Alliance for Democracy (AD) people after they had reached a deal with him.”

Foreigners Reveal Why They Applied For Nigerian Citizenship