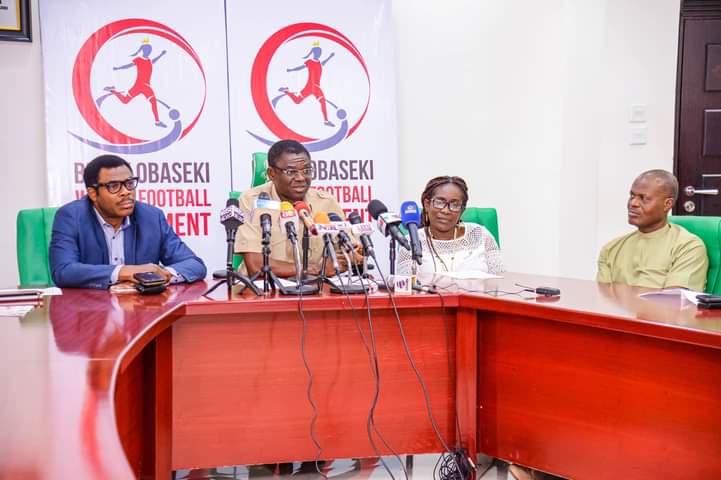 The Edo State Deputy Governor and Vice-Chairman, Board of Trustees of the Betsy Obaseki Women Football Tournament (BOWFT), Rt. Hon. Comrade Philip Shaibu, has said the second edition of the yearly football tournament will drive the government’s campaign against drug abuse and illicit trafficking.

Shaibu said this while briefing journalists in Government House, Benin City, on the preparedness of the state to host the second edition of the tournament.

He said the tournament which will commence on the 7th of September 2022 will have 12 teams participating, with 10 coming from the Nigeria Women Football League (NWFL), while the other best two female teams from Edo State will join the competition, adding, “The opportunity given to the teams from the state is to expose our young girls and catch them young.”

Shaibu noted that “At the final of the competition on the 17th of September 2022, first ladies from the 36 states of the federation will attend the game at the Samuel Ogbemudia Stadium in Benin City, Edo State.”

He continued: “We don’t discriminate in Edo State as this is the only state where our female and male football teams earn the same salaries. We are building up the girl-child and giving them support to thrive in all they do. Look at the performance of our female team in the Commonwealth Games, winning 12 gold medals while the men won none. Females need to be encouraged to do better.

“Women football has come to stay in Edo State as we appreciate our First Lady, Betsy Obaseki for making the competition an annual event and a pre-season tournament to prepare our girls.

“We are using this year’s tournament to create publicity and awareness against drug abuse and trafficking. We have upgraded the tournament. It will take place in different locations in Edo State. We have built 20 mini-stadium in the state and will be using two of them including the University of Benin Sports Complex and the Samuel Ogbemudia Stadium.”

The deputy governor added, “We already took steps of institutionalizing this event as it is private sector-driven. We have instituted a board of trustees to institutionalize the tournament.”