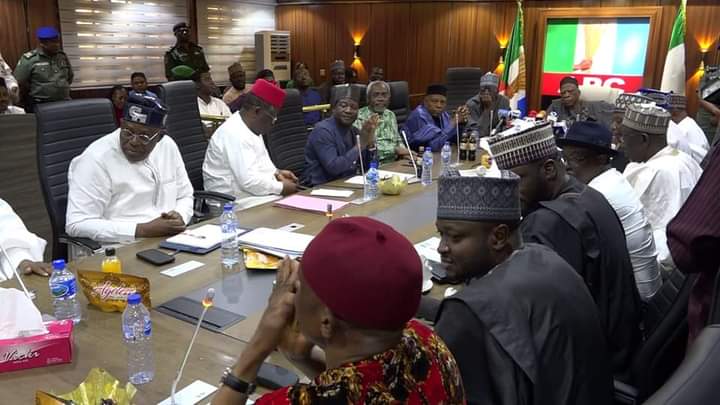 The All Progressives Congress, APC, Presidential Candidate, Bola Ahmed Tinubu and his running mate, Senator Kashim Shettima, visited the party’s national secretariat for a thank you meeting with members of the national working committee.

Tinubu, accompanied by Shettima and the Speaker House of Representatives,, Femi Gbajabiamila, were received by the National Chairman, Senator Abdullahi Adamu and some NWC members of the party.

Speaking with the media,Tinubu passed a vote of confidence on the National Chairman, Abdullahi Adamu and his executives while condemning those who he termed manufacturers of rumour for concocting alleged feud between him and the chairman.

According to him it was an honour, to interact with the team that authorised his becoming the candidate of the part but he had not been able to say thank you sincerely since the primary and they have already hit the ground running, especially as the unveiling of his running mate was held outside the party’s headquarters.

He appreciated all members in attendance that day, promising that they have come together as a political party and taken progressivism as their doctrine as they have to be progressive in thinking, deed and objective to serve the country.

On his part, the National Chairman of the party, Senator Abdullahi Adamu, assured that every Nigerian will benefit from the that there refreshing emanating from the party which will continue to develop in a rapid way.

He further that they will comply with INEC rules and regulations regarding the elections after which they will unveil those things in plan for the country especially as their objectives, creed, and commitment as a party are development and commitment to transformation,.

The Chairman clarified thar the meeting is to consult further, the organisation structure for the campaign for them to harmonise, dispel any fear and make sure that they have an inclusive party where all hands are on deck to ensure they are victorious during the election.