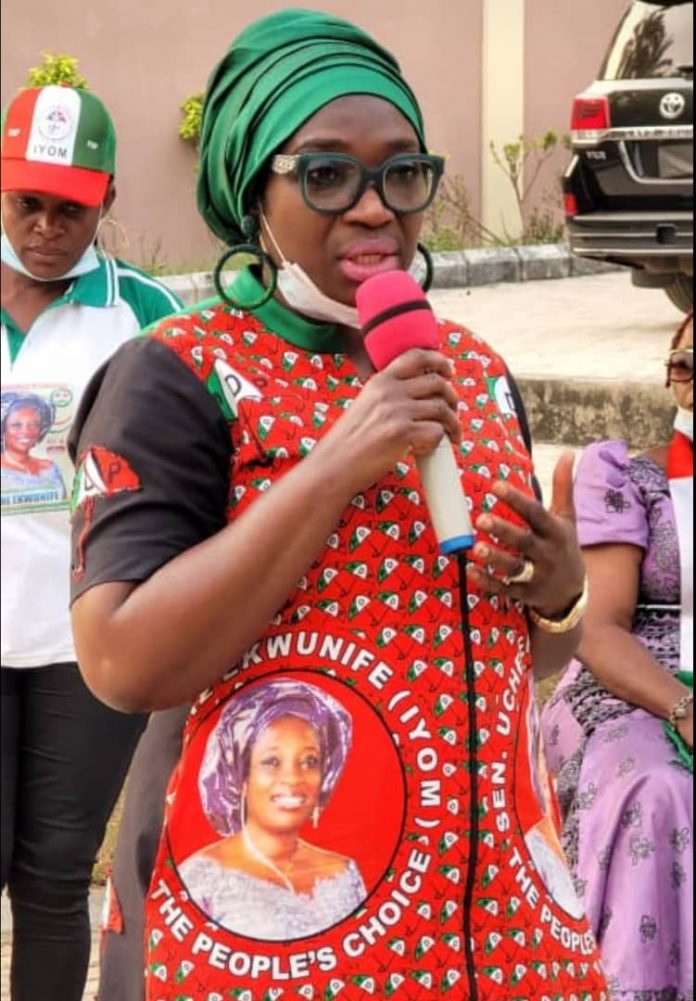 The leading aspirant for the November 6 Anambra governorship election, Senator Uche Ekwunife salutes the workers of Anambra State on the occasion of the 2021 International Workers’ Day Celebration, describing them as the engine room of government and enablers of economic growth.

In a statement released on Saturday, May 1, 2021, in commemoration of the 2021 May Day celebration, Ekwunife congratulated the workers for their resilience, sacrifices and contributions to the state economy, noting that there can be no development in the state without them.

Ekwunife highlighted payment of salaries, allowances, minimum wage, pension and gratuity as important areas of focus for any government that wishes to motivate its workers and improve their general conditions of service. The Senator noted that if elected as governor she will normalize payment of salaries, allowances and pensions before the end of the month, and payment of gratuities at least two months after one’s retirement.

“Besides the challenges of remuneration, I have identified housing and transportation as other areas where many workers are facing challenges. With the annual rent of a flat in many urban areas in the state fixed around N300,000, it is certainly difficult for the majority of state workers to break even, except the government deploys a strategy that will address the housing needs of residents.”

“I have stated on many occasions that we must through strategic effort create new urban areas and satellite towns in Anambra. Many communities bordering Awka, Onitsha and Nnewi are underdeveloped hence the demand for people to live in these three major cities has remained high, with a ripple effect on the cost of accommodation.”

“Government agencies and parastatals are known to be drivers and enablers of development. Government must decentralize the establishment of its institutions, colleges, agencies and parastatals even as it makes effort to create an enabling environment for the private sector to do the same by providing electricity, building roads and bridges to address the challenges of accessibility to and fro towns and cities.”

Senator Ekwunife also revealed plans to enhance the current welfare transport system for workers in the state. According to her, her government, if elected shall provide subsidized transportation for workers to and fro cities, towns and villages.

Ekwunife commended the leadership and members of the organised labour in the state for their patriotism in mostly choosing dialogue over industrial action in resolving trade disputes. She stated that no nation or state can develop without a vibrant workforce and encouraged workers in both the public and private sectors to continue to contribute their quota towards the development of the state.